During its history of almost 150 years, Kenwood School has been the home to thousands of students. In some cases, three generations of a family have attended Kenwood, and the tradition of fine students continues now.

Doctors, scientists, military leaders, musical and theatre stars, secretaries, company owners, nurses, cooks, interior designers, farmers, writers, civic employees, artists, contractors, law enforcement officers, poets, ministers, educators, politicians, homemakers, volunteers, photographers, athletes—these are just some of the many interesting paths that former students of Kenwood School have chosen to follow. Add to this an amazing blend of hobbies, pastimes, and life interests and there results a terrifically rich and eclectic collection of pleasant, productive, and interesting people. The schools of the Kenwood Park area are honored to have been a part in the lives of its students and proud to be home to so many fine alumni.

The doors of Kenwood School are always open and welcoming to former students, families, and friends of Kenwood. We love hearing from alumni members, and hope that when you are in the Kenwood area, you will feel very free to stop in, introduce yourself in the main office, and take a tour of our fine school, which is still actively and beautifully continuing to build its alumni family through our current enrollment of excellent children. 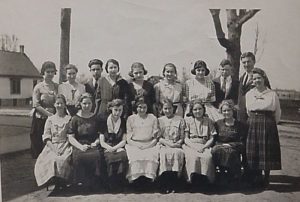 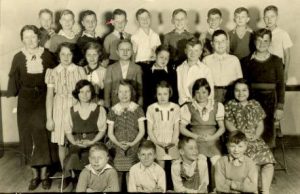 Fifth graders at Kenwood School are shown here with Miss Brandt, their teacher, in 1935. Kenwood used the mid-year concept to accommodate birthdays in all 12 months of the year. This photo includes both 5A and 5B students at the 35th Street Kenwood School. The mid-year idea was abolished in 1955, so that when the students reached the twelfth grade, there was no longer a January graduating group. All students then completed their studies in June each year. 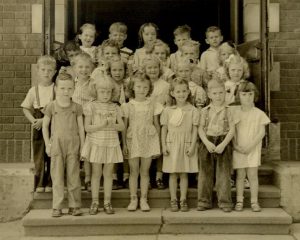 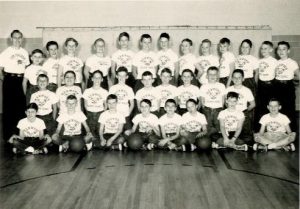 Before the Bulldog became the official mascot for Kenwood School, Kenwood was known as the Home of the Golden Bears. Here, proudly wearing their mascot sport shirts, are members of the Kenwood Boys’ Club in 1951. The students met at Kenwood School regularly year-round for sports and other extra-curricular activities after classes. The group was well-supervised by both regular Kenwood School staff members and student teachers from area colleges. 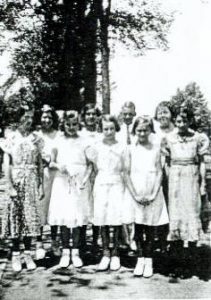 The sixth grade class at Kenwood School in 1934 had only nine members, eight of which were girls. Because of the small number, the Kenwood students spent the first semester at Arthur, combined with Arthur district students. The second semester found them happily back at their own building at 35th Street and C Avenue. In the late 1950s, until more elementary schools were built on the city’s northeast side and an addition placed at the newer Kenwood School on E Avenue, it became so crowded at Kenwood that it was necessary to send their sixth grade students on to Franklin Junior High School. 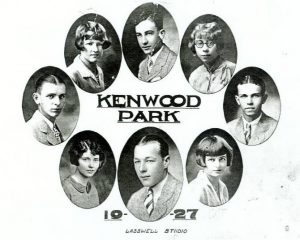 Lasswell Studios had the contract for the graduating class portraits of Kenwood Park High School from 1921 through 1927. Unfortunately, through the years, all of the negatives for such photos were discarded, lost, or destroyed, making these photos quite difficult to find. The Class of 1927 was the last graduating class of Kenwood Park School, as it then became a part of the Cedar Rapids Community School System. Future Kenwood students graduated in 1928-1935 from the old Washington High School located in Greene Square. When it was closed, Kenwood students became graduates of Franklin School in 1936-1957. Later, Kenwood students who remained in the Cedar Rapids public schools went on to graduate from either the newer Washington Senior High School or Kennedy Senior High School. Since 1927, Kenwood School has served only the elementary grades. Today many of the graduates of both senior high schools in Cedar Rapids have their elementary roots at Kenwood School. 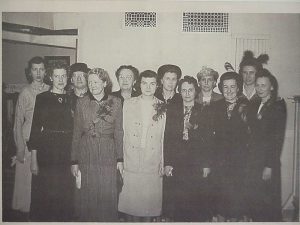 Dinner of 1948-49 was one of the last large student/parent/staff functions to be held at the bungalow Kenwood School building located at 35th Street and C Avenue NE before all Kenwood children were moved to the new and present location on E Avenue NE the following year. Shown here are the teachers who attended the dinner. They include Pat Jensen, Lucile Dunn, Henrietta Harken, Alphild Brandt, Miss Bures (principal), Zora Pauk, Jean Moore, Helen Arduser, Irene Wlach, Lucille Jenkins, Marian Kennedy, and Margaret Hult. 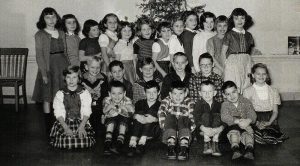 s it was common for each classroom to have a live Christmas tree. Sometimes money was collected from students for their purchase. Sometimes the trees were donated. And oftentimes PTA would provide them so that no room would be left out. Electric lights were permitted on the trees, and decorations were often student-made. Tree decorating usually took an entire afternoon in early December, and the holiday party with drawn names and gift exchanges was usually held on the day before winter holiday break, at which time the tree was usually the center of classroom photos. Shown here are students in Miss Hult’s fourth grade class in December 1955. 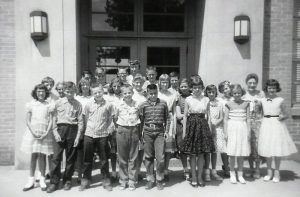 any class photos have been taken through the years at the front entrance of Kenwood School. The last day of the school year was known as Camera Day, and many students brought box and brownie cameras from home. We can be thankful for those who took photos, saved them, and shared, for they now provide important historical records for today’s students and others who enjoy Kenwood area history. The noontime sun was great on the last day of school in June of 1957 when Miss Putnam’s fifth grade class lined up for this photo. Also shown is Kenwood second grade teacher, Marie Landau, who joined many of her former students in the group shot.

Shown here on camera day in May of 1955 is Miss Sara Bacino and her third grade class. Miss Bacino taught at Kenwood School for one year and was a favorite of many students. 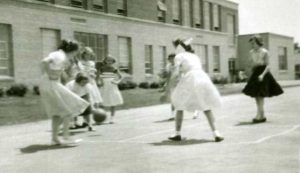 r square was a favorite game with most students on the Kenwood School playground. Wearing dresses and skirts didn’t hamper most of the girls, who engaged in the game eagerly and skillfully. The same enthusiasm was shown in softball and tetherball at Kenwood in the 1950s.

quiet games were enjoyed on the Kenwood School playground back in the 1950s such as four-leaf clover hunts, marbles, jacks, and hopscotch. Here two fourth graders take turns at a game. In the background is 37th Street before the growth of its current shade trees.

ay was always special and usually took place during the last week of the school year, often on the final day. Here three sixth grade girls, who were best friends through their Kenwood days, pose for a shot. The three graduated together in 1964 from Washington Senior High School following their junior high days together at Franklin School.

the last day of school in 1958, these three Kenwood sixth graders enjoyed having their photo taken. All three went on to attend Franklin Junior High School and graduated together from George Washington Senior High School in 1964. 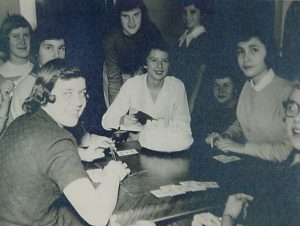 n in the years after graduation from Kenwood and nearby elementary schools, friends stayed close together as the friendship circles expanded. Shown here at a get-together for Janis Clark (center) in the middle 1950s, are Kenwood alumni Kathy Daugherty, Kay Caldwell, Peggy Barto, and Linda Lundine with others from Garfield and Arthur schools.

Recently at Kenwood School, students, staff, neighbors, and friends had the opportunity to enjoy an interesting exhibit featuring Kenwood School alumni. Numerous people came to Kenwood from near and far to learn about some of Kenwood’s past students. Photos, memorabilia, and text articles were available for viewing in the front foyer display case. Former students of the 1920s through the 1990s were honored, with each of the decades being represented. Alumni from all over the world were included to show the various life paths that have been followed through the years. From a well-known CBS News personality to successful homemakers, from a local hotel owner to the head of a Chamber of Commerce—Kenwood School has been a part of them all. Shown here is a photo of the visual collection of past students of Kenwood School as they appeared in the special alumni display. 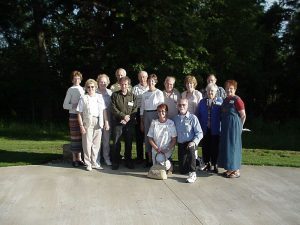 It was a delightful reunion on June 25, 2004, for fifteen people who lived in the Kenwood area during the 1930s and 1940s. Most of them were fortunate enough to have attended Kenwood School in the bungalow schoolhouse at 35th Street and C Avenue NE and all went on to graduate from Franklin School. Returning from as far away as Phoenix and Florida, they were on hand to attend the 50th reunion for the Franklin High School Class of 1954. What a fun and rewarding occasion! Former Kenwood children shown in a reunion photo here are Fran Houts Bramson, Vernal Moore, John Rosenberg, Ken Beach, Judy Zuhn Beach, Jerry Emerson, Ron Umsted, Ione Poole Murdock, Barbara Hutton Edmunds, Susan Ray Storm, Sherin Quinn Gifford, Ted Ramsay, and Joyce Holets Lux. 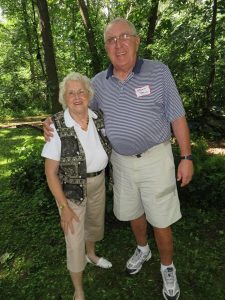 Former Kenwood School students, Barbara Hutton Edmunds and Frank Daily, enjoyed attending a reunion event for the Franklin High School Class of 1954 on Saturday, June 29, 2013. Their elementary school days were spent at the bungalow building on 35th Street at C Avenue NE. The weather was lovely for this annual reunion potluck picnic hosted by former Kenwood area residents and Kenwood business owners, Jack and Kathy McArtor, at their country cottage near Central City, Iowa. The McArtor’s daughter, Jaclin, attended Kenwood School in the present building during the 1960s. 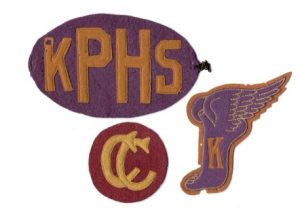 If you were a student at Kenwood Park High School in the 1920s, you might have had the above felt machine-stitched emblems. They were sewn onto sweaters, book bags, jackets, and other garments. Each graduating class also had a pin with ‘KPHS’ on it. Any graduate who purchased a pin could have their year of graduation linked to it with a dainty gold chain.

There is hardly an avenue in life that remains untouched by a former Kenwood School student. Nor are there many places on the globe that haven’t seen the influence of someone who attended Kenwood School in Cedar Rapids, Iowa. Thousands of children have been students at Kenwood School throughout the decades, and here is just a portion of the list of names and the many professions/activities that they have experienced: